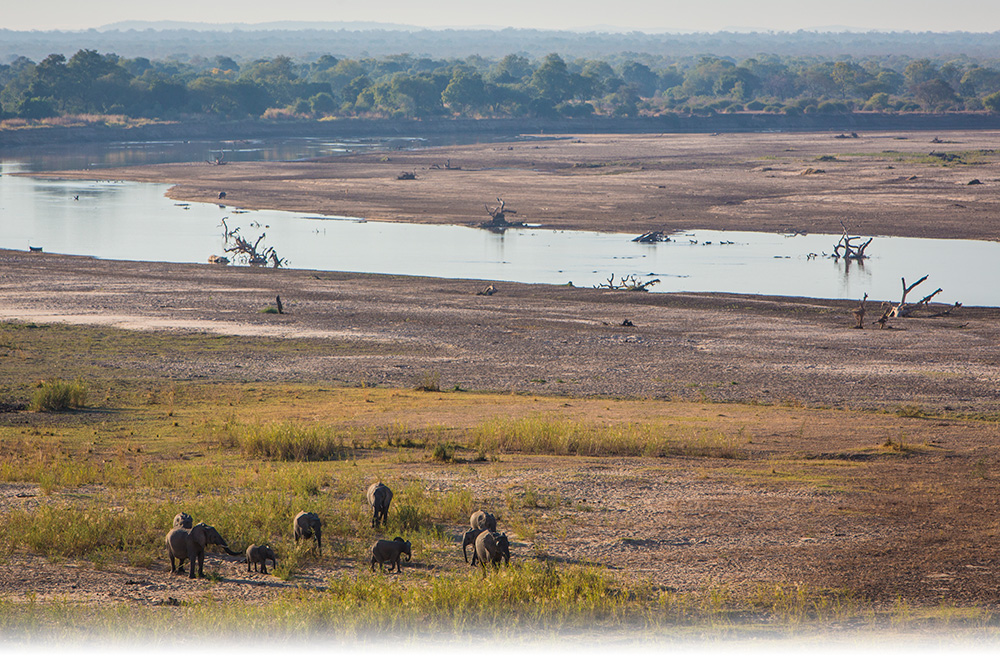 The September sunshine has been bright and hot, bringing all of the action closer to home. It has been a really busy month – which is great! – and as expected with this time of year, the game viewing has been excellent.

The iridescent CARMINE BEE-EATERS are proving an amazing spectacle as always. We erected a hide by the breeding colony just downstream from Tafika camp, as per usual. This bank has been a chosen breeding area for the carmines for several years in succession so we were extremely distressed when the birds abandoned the site. On closer inspection, it seems a troop of pesky baboons had raided the nests and forced their eviction. The bank is not as steep as last year, providing easier access for exploitation by the ‘bullies of the bush’.

Luckily, the carmines have settled on a new spot just upstream of Tafika so we moved our hide there for the rest of the season and hope our feathered friends have better luck settling in this new area.

The CHIKOKO TRAILS walking camps have been busy this month. Additional lights have been added to the chalets, with light switches at the door to brighten the way upon entry. These efficient LED lights provide an inviting warm light. CROCODILE RIVER CAMP had more guests than expected the other night when 15 lions visited the waterhole during evening sundowners. Moira Jones’ torch lit up their presence and the lions were totally relaxed, ignoring the onlookers. Later on, they got up to some mischief by attacking the water well bucket and shredding the rope which had to be replaced the next day!

We have had some exceptional sightings on foot with several highlights including huge herds of buffalo, as many at 30 roan antelope, wildebeest, sleepy leopards draped over branches, lions up trees and several sightings of wild dogs. Patrick and Allison Crawford, our good friends and repeat guests (of 15 years!) saw a pack of dogs devouring an impala in the space of 25 minutes just behind Crocodile Camp. Read more about their walking safari and what they saw in Patrick’s Chikoko game viewing diary and Crocodile game viewing diary.

The SAUSAGE TREES are a central focus and are undoubtedly an important tree for wildlife at this time of year.

The nectar is eagerly sipped on by endless numbers of monkey, baboon, birds, genets, bees and other insects; the deep maroon flowers are vacuumed each morning by the bushbuck, impala and buffalo and the dense sausage fruit are feeding giraffe, zebra, porcupine, baboon, squirrel, impala, rhino (in the North Park) and most of all – hippos. Indeed it is this adaptation to their diet at this dry time of year that is key to the very large population of hippos in the Luangwa Valley – nowhere else within their range are they recorded as consuming so many sausages. The new green leaves are also providing great nourishment for our browsers.

At Tafika Camp we celebrated the FULL MOON on the 25th of September with a surprise dinner on the beach. Rona and the chefs spoilt our guests with a delicious meal under the moonlight. We toasted the huge moon with a glass of wine and ended the evening with a beautiful leopard sighting by the camp waterhole on the way home – a great night cap and finale to the evening.

We get so many animals in and around Tafika Camp that we decided to set up a CAMERA TRAP by the hide’s waterhole. It’s been a lot of fun as we’ve been able to get a sneak peek into the secret life of our furry, curvy and feathered camp residents even when we’re not squirreled away in the hide.

In the last few days we’ve photographed a wide array of animals including elephant, buffalo, puku, baboons, monkeys, ground hornbill, white crowned lapwings, black headed herons, banded mongoose, bushy tailed mongoose, our resident male leopard (with a very big tummy!) and even marsh and large grey mongoose which are rarely seen. Keep an eye on our Game Viewing diaries for the photos. Many passers-by were unfazed by the camo camera but more animals than expected puzzled over it, like this quizzical fellow…

From the operations side – Tom, our resident pilot, has been busy zooming around the countryside in our company aircraft, a CESSNA 210. His flights have taken him to numerous destinations in the region including Mfuwe, Mwaleshi, Lower Zambezi, Lusaka, Shiwa N’gandu, Bangweulu Swamps and he even crossed the border into Malawi this month. Tom is based at Tafika and the plane at our own airstrip nearby, providing our guests with a lot of flexibility to their itineraries and opening up the attractions of the ‘Northern Circuit’.

The BREAKFAST wakeup call is creeping ever forward as it heats up. Breakfast is often a game viewing activity in itself these days and over the past month there have been lovely sightings on the opposite bank at Tafika, including elephants crossing the river and dust bathing, a fishing party of spoon bills, lions, wild dogs, hippos, crocs and hyena. The most exciting sighting was a pack of wild dogs that ran past the camp just after breakfast and hunted along our peninsula.

They finished off with a drink at Tafika’s waterhole before bounding off into the bush. Moral of the story – bring your binos to breakfast!