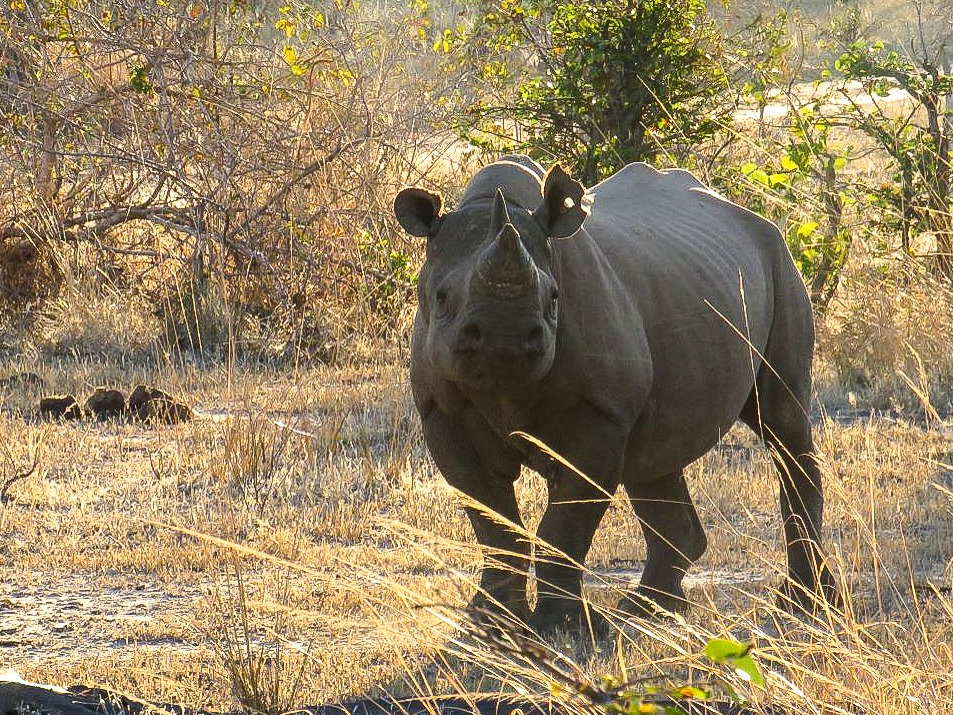 As winter sets in and temperatures drop, the pace of the season is picking up and keeping us warm. Our winter is really mild so apart from some chilly mornings and evenings, the days are lovely and sunny. The bush is starting to clear and the great start to the season’s game viewing is getting even better.

MWALESHI CAMP opened mid-June with Alex heading up the building team in the North. There was huge rain this year resulting in some erosion at the camp and one chalet was moved back slightly but apart from that, very little has changed at Mwaleshi and the camp is still refreshingly simple and totally remote.

The Mwaleshi season started with a bang with Alex welcoming back friends and repeat guests, James and Julie Dore, and presenting them with their first rhino sighting in the Luangwa Valley!

First safari in the north and first rhino sighting for 2019! Thanks to the tireless and wonderful work of NLCP, these amazing animals are roaming the Luangwa again.

Julie and James flew out of the North Luangwa on our RASair Cessna to continue their safari at Tafika Camp. That evening they saw lion, leopard, buffalo and elephant on their evening drive thus achieving the BIG 5 all in one day.

FOOTBALL FOR WILDLIFE kicked off on the 23rd of June, marking the 4th football league we have funded and hosted in the South and North Luangwa. The aim of the league is to promote conservation and encourage cohesion and collaboration between the communities.

The league will proceed for the next 6 weeks with 8 mens teams and 8 ladies teams from both the South and North Luangwa batttling it out to get to the final.

The league is a massive undertaking and is run by Carol and Jimmy Sakala, our charismatic tailor and ex-footballer.

If you’re a football fan and would like to support the league by sponsoring a team for $2000, please let us know (Sponsorship goes towards team kits, match fees, transport and medical travel for all players and match officials). We would appreciate any help to keep the ball rolling.

The GAME VIEWING has been really good this month with great sightings of Thornicroft’s giraffe, elephants, lion, big herds of buffalo, good birding during the day and night and of course, great sightings of leopard with our sneaky spotted hyena in close pursuit.

There were several sightings of wild dogs in the walking camps at the beginning of the month and we suspect they are denning in the area. We hope to see more of them next month and August when pups are old enough to venture away from the den.

There have been several great lion sightings on foot during walks at the Chikoko Trails walking camps. The same pride killed a puku opposite Tafika Camp a week ago, providing an exciting spectacle and beautiful serenading of lion and hyena calls during a star lit dinner.

Birding has been fruitful with lots of lovely sightings of several feathered friends both big and small. Alex spotted an Ovambo Sparrowhawk and melanistic Lizzard buzzard up at Mwaleshi which was a lifer for our friends and repeat guests, Lauk and Gerrie Quispel.

Another exciting bit of news is the latest great addition to our team, MARK MCADAM. Mark joins Remote Africa as an investor and director.

The Luangwa Valley has long held a deep fascination for Mark as one of the last true great big game wilderness areas left in Africa.  The raw beauty and density of game is unmatched anywhere, along with the knowledge that stalwarts John and Carol bring through their 35 years of unbroken experience living and working in the Luangwa.

Remote Africa’s expansion in the North Luangwa National Park, with the opening of Takwela Camp in July, is just one of the exciting new chapters to look forward to together. Mark’s family also share his love of the Luangwa and the remote safari experience. William (left), Lucy and Jack (right) are true bush spirits having grown up in the vast expanse of the Northern Cape and have taken to the Luangwa as naturally as their father.

Mark McAdam grew up with an insatiable passion for Africa, its incredible wilderness, conservation and ‘the bush’. Although he was born in Cape Town, South Africa; Mark would spend every available opportunity visiting Zimbabwe, Namibia, Mozambique and Zambia.

Mark first met John in the mid-1990s while marketing his own lodge, Bushman’s Kloof, at the various trade shows. They spent many hours together talking about the Luangwa Valley, with Mark being a regular visitor to the Remote Africa stalls to gaze longingly at photographs and gather any information he could from John. After his extremely successful venture with Bushman’s Kloof, Mark started another operation, Hunter’s Moon Safaris. Following the sale of his second successful safaris business, Mark contacted John with a view to fulfill his dream of working in the Luangwa Valley. The timing was fortuitous and in 2019 a partnership agreement was finalised and Mark joined the Remote Africa family.