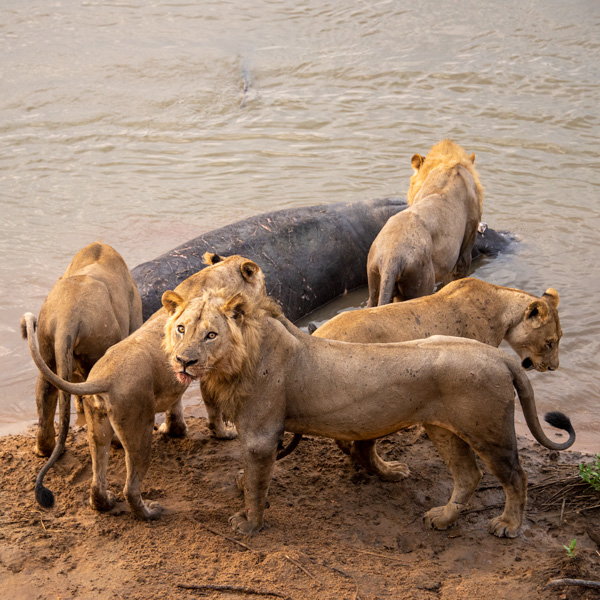 Our last week at Tafika has been packed with action. It has been wrapping up guest visits, de-camping and stock taking, of course watching the 2019 Rugby World Cup Finals and enjoying our last moments with the Luangwa Wildlife before departing for the off-season.

These lions had been around for a few weeks, and I had spent the better part of the morning watching them slosh around in the mud (the rains had begun). They had just finished off a buffalo carcass near Tafika, and we knew that there was a hippo which appears to have died of natural causes in the river just upstream of Tafika. After watching South Africa take the trophy in the finals of the rugby, I dashed back to see what the lions were up to. I found them walking toward the river bank where the hippo carcass was, and positioned myself before their arrival.

The lions casually walked right by the vehicle and down the bank to where the hippo was. Of course it was the girls who courageously walked straight into the river to inspect the carcass – with the boys not too keen to wet their feet. Eventually the boys got their act together and got stuck in, using their impressive strength to pull the meal toward the bank, with a very melancholic hippo watching this scene play out.

Once the males got the hippo to the shore, we left them to feed and decided to come back the next morning… wondering how much would be left once the lions and crocs had both eaten their fill. Much to our surprise, the lions had spent the night nearby but the crocs had not done much damage to the hippo overnight. From our staff dining area we were able to keep an eye on proceedings throughout the day.

Late in the afternoon, once things cooled down a little, the lions were back in the water taking on the crocs to get their own trophy back. We watched as the females (rather nervously) picked at the remains of the carcass in the middle of the shallow Luangwa River.

One of the males, right in the late afternoon’s golden sunset light, decided that he had enough of waiting it out. He walking across from the beach opposite camp and straight into the water. His determined stride saw him reach the croc-laden hippo carcass in no time. The crocs all skulked away.

I walked down to the water’s edge to get a low-profile image along the surface of the water and attracted the attention of the male lion, given that he was on high alert. It was such an incredible moment being right down on the bank of the wild Luangwa River, in the stunning golden sun, being part of this moment where a saddle-billed stork was minding its own business, a ferocious pride of lions was lying full-bellied on the opposite bank in the sun, hundreds of crocs were enviously watching the remains of their carcass being dragged away and this gorgeous male lion in all his strength and bravery was rising above it all to secure this meal… his trophy.