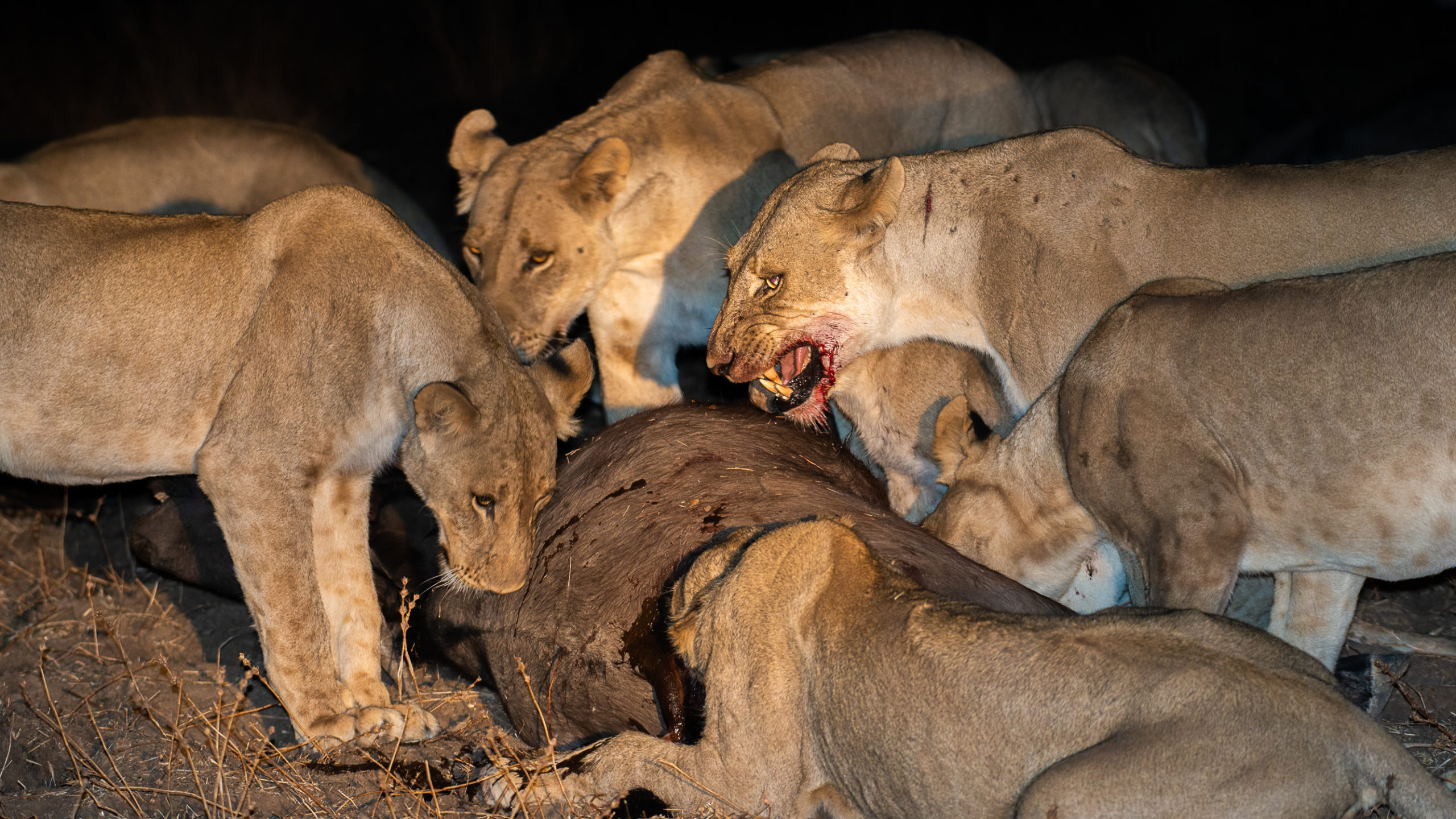 My school in South Africa was know as the home of the leopard, with pupils being called sons of the leopard. It is then only quite fitting that I have uprooted myself and made my new home in the Luangwa Valley – the valley of the leopard. The motto at my alma mater is “Virtute et Opera”, which means Courage and Toil. While I have had numerous incredible leopard sightings and encounters, I had an experience while watching lions in which this motto rang true for me.

While out spotting on a night drive from Tafika Camp with Bryan Jackson as the guide, we headed along the riverside of the Nsefu Sector in South Luangwa National Park. We had passed a lioness picking away at an old buffalo carcass from the day before while the rest of her pride lay in the shade of a sausage tree.

We moved along the river enjoying the hippos, giraffe and elephants and all of the rest that this unique part of the park has to offer. At this time of year, lion prides are at the peak of their predatory curve as all of the big game are concentrated, hungry and weak. We knew where another pride of lions had been seen in the morning and so we headed in their direction.

Turning inland and away from the river, we went in search of the buffalo and lions. We came up on the pride of lions just after sunset and could only just make out their reflective predatory eyes in the spotlight. They were off the main road, and so we left them be and carried on with the game viewing loop. We turned back toward the river in an open plain and saw the herd of buffalo we had been looking for. Second later, we saw those bright cats eyes in the dark. The lion had obviously herd the buffalo and doubled back on their path and come in toward where we were. This pride was 9 strong, including 8 females and a cub.

The next 30 minutes I will always remember clear as day. The lioness started circling the buffalo, which in turn bunched up and started trotting in a spiral, in much the same way that fish do in the ocean. The lions down two young buffalo quickly before the buffalo had fully formed into a tight group. The herd charged one lioness, forcing her off the young buffalo – while the other lioness managed to go undetected. 1 Buffalo down.

For the next five minutes the buffalo kept in a tight circle, with the lions holding their perimeter. Suddenly, the lions rushed in and forced the herd to break. Within a minute the lions had taken down another 4 buffalo. By the time the buffalo had gathered themselves, the lion had secured their positions on their prey. With the dust settling, we found that the lead lion was in fact the cub. Try as they like, the buffalo could not chase off this young cub from her grasp on her prey. So impressive was her determination and perseverance in the face of 200 adult buffalo, with a few of them no more than a meter away from the little cub.

The free lions kept the buffalo herd at bay, while the successful hunters finished off their tasks. Once the buffalo had given up some wiggle room, a lioness came in to help the cub and pass on the skills of finishing off prey. We sat in silence for twenty minutes taking in what we just witnessed. One vehicle. Four guests. A lifetime memory.