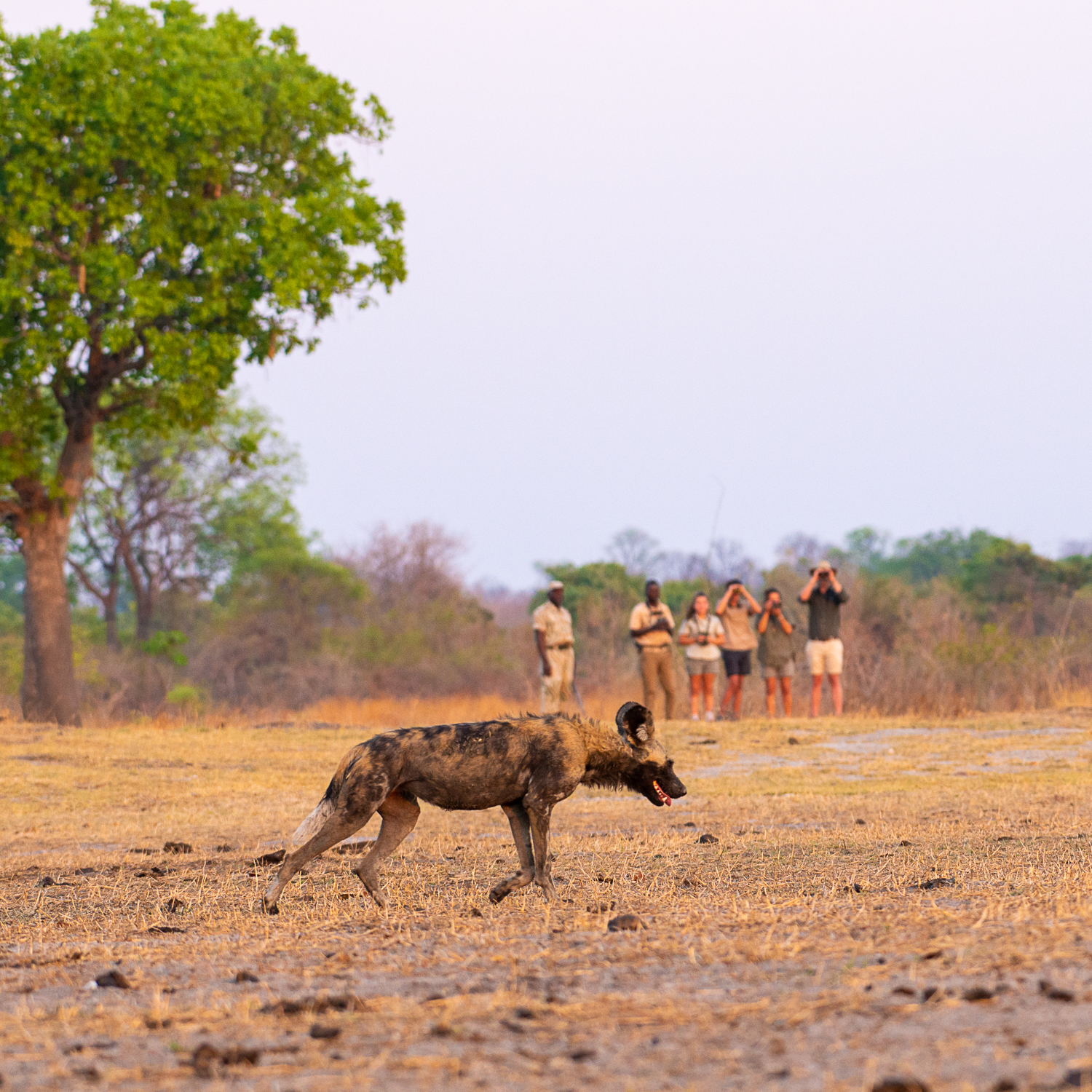 Toward the end of the 2019 safari season at Remote Africa Safaris, I was in the back seat of the microlight around sunrise, taking in the last days of being in the Luangwa Valley for many months to come. It is a place that I, along with most people that visit, have come to love and long for.

Nearing the Chichele Salt Pan (or hot spring) I spotted a pack of wild dogs playing around in some puddles that had developed with the first few showers of the rainy season.

We circled a few times, taking note of how many adults and pups were present in the pack to assist in identifying the pack, as well as recording whether any of the dogs had collars on them. Another valuable observation is to note the condition of the individuals within the pack – are they all in good shape, are any carrying snares, are any visibly in trouble (limping, open wounds, etc.). This information is then assessed and passed on to the Zambian Carnivore Programme (ZCP) and Conservation South Luangwa (CSL) as is necessary.

That afternoon a family of guests at Tafika Camp were looking forward to going for a short drive to try and find the dogs, with the intention of going on a short afternoon walking safari. Knowing this family well, and having had them return to South Luangwa on countless occasions, I asked whether they were happy for me to photograph them on their safari walk.

Upon arrival at the Salt Pan, we found the dogs on the edge of the water and from a distance they looked playful and rather active for the time of day and ambient temperature. Once we got a little closer, we noticed that they had surrounded a mature warthog and had it cornered at the waters edge.

The warthog, having none of this imprisonment, edged back and forth in this tight circle, jostling for the most minute of gaps. Eventually a crack opened up in the defences and the warthog took off like a shot! Sprinting across an open plain for over 500m we watched with baited breath as two dogs remained in hot pursuit. Fortunately, the warthog went crashing into the thicket, leaving the dogs trotting back to join their pack empty-handed.

After all the action, the family had decided that they were ready for a short walk around the area with Mkasanga resident and Remote Africa guide, Amon Zulu. The pack happily carried on their business as usual, leaving the family to enjoy being out in the open, in nature, observing things at nature’s pace.

Having stepped out of the vehicle for 45minutes, the family were ready to enjoy the sunset in the comfort of the vehicle and we took a short drive back where we had witnessed the warthog chase only an hour earlier. Sitting in the golden, setting African sun is a feeling that cannot be described… but it is one that can be missed! The warm glow on your skin, coupled with the cooling evening air signalling a change in the daily rhythm. The gold turns to pink as you sip down your refreshment of choice. The diurnal animals and birds start to seek refuge, some after a quick feed before bedding down. The nocturnal animals start to wake.

As we sat in this frozen moment of African luxury, the dogs decided to trot back to the water and enjoy sunset with us. Pups playing. Parents anxious to get back to their den before crossing paths with the numerous and powerful lion prides.

Many people who go on safari are after a number of bucket list items. Seeing wild dogs is one of those, watching the speedily chase prey in the open is another. To be on foot with nothing but open space between you and these playful predators is certainly also high up on this list. Sharing sunset with a pack of wild dogs is probably not something often considered.. but a moment never to be forgotten.

One other sigthing that is very high up on many safari-goers lists is observing predators make a kill. It is not something that some all people wish to see, and by its very nature can be considered incredibly cruel and gruesome.. but when entering a national park, and spending time around predators, one has to appreciate the skill that they possess as individuals (in the case of leopards), or in co-ordinating group hunts (as with wild dogs and lions).

On this evening, our time with the dogs was not up. We started moving away from the pack only to have them trot along with us heading back towards camp. A few minutes later a stray impala came out of the thicket into the open and was chased down and killed by the pack in an instant, providing the much needed nourishment to sustain their strong pack and active lifestyle.