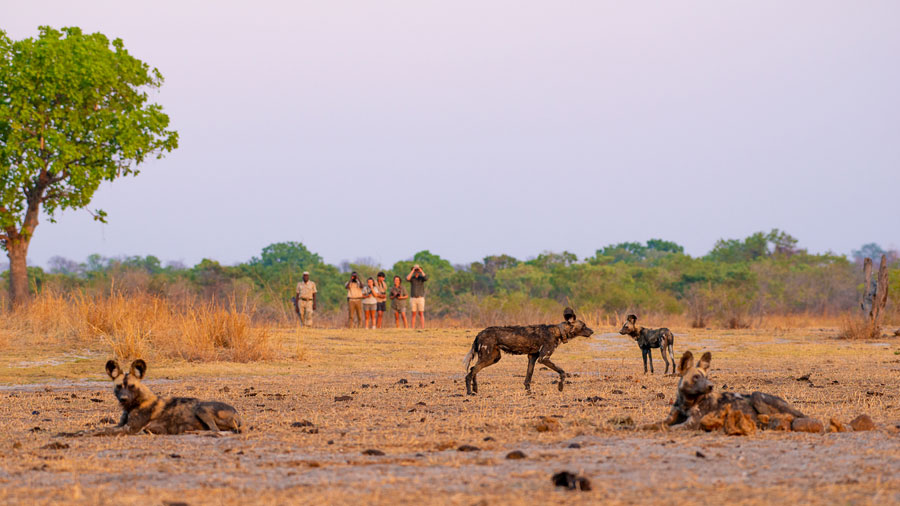 Can you handle the heat?

October in the Luangwa

It’s amazing to think we’ve come to the end of another great season. October has been busy with lots to reflect on, let alone looking back on the whole year (so we’ll do that in the next mailer). Those that could handle the heat have been rewarded with sizzling game viewing this month. We’ve had more incredible sightings in both the South and North Parks despite the early rain that arrived on the 2nd of October. The showers brought welcome relief from the heat and since the rains were minimal, didn’t affect game viewing but stimulated early flowering, leafing of forests of mopane as well as the riverine vegetation.

The month has seen many lion kills with buffalo, zebra, puku and kudu all falling victim to their claws and all sighted during game drives and walking safaris. Leopards have been on the prowl too but spending a fair bit of time in trees, out of hyena-reach and strategically perched to catch a cool breeze. The wild dogs have been particularly active this month and we’ve seen three packs including the Mwasauke pack of seven (including the two pups) regularly – passed out under bushes, wallowing in muddy puddles and bounding after antelope or warthog. We even saw wild dogs on a cycling safari which was a first for the year! Several sightings of porcupine and honey badger were night drive highlights.

The dogs have been spotted more on foot this year than in the vehicle and the Trails camps have continued to see many lions, huge herds of buffalo, elephant, eland, kudu and giraffe.

An abundance of lion have been sighted in the North Luangwa on foot and from the vehicle. Many healthy lion cubs promise a growth in numbers next year. Great sightings of several plains game, particularly kudu and Cookson’s wildebeest, have also been enjoyed. With the temperatures picking up, Mwaleshi guests have been wallowing in the Mwaleshi river on a daily basis. The baboons are also enjoying more time in the Mwaleshi river!

Another black rhino sighting on foot at Mwaleshi sparked great excitement and even RASair passengers and pilot Rory got to meet their first black rhino on a flight to Lubonga airstrip in the North Park!

Our in-camp / armchair viewing has been quite amazing this month with daily visits of elephant to the Tafika waterhole.

Thanks to our few early showers, Stephen even spotted our first baby impala of the season at the Tafika hide on the 26th of October somewhat earlier than generally expected. The mother was very weary and moved away with her precious new addition into the long grass.

Events got even more exciting when we had some exceptional lion viewing over breakfast. The opposite bank stretches out in front of Tafika like a huge wide screen and that morning it revealed a male lion being evicted from the territory by a coalition of three brothers.

The victim trotted towards us, along the beach and then crossed the river just up stream of Tafika, spraying defiantly (and a little guiltily) as he moved away. The three victors came down for a drink right across from us and roared continuously, ensuring that we all knew who was boss!

Out in the Trails camps, armchair viewing has also been rewarding with Chikoko’s stilted chalets overlooking Acacia Park with an abundance of wildlife attracted to the fallen pods. Crocodile’s little camp waterhole has attracted a huge amount of attention from elephant, warthog, baboons and lion. The flowering trees and leafing mopane have also produced stunning scenery in which to walk. Even the smallest insects are enjoying the Rain Tree flowers (Philenoptera violacea) like these ants which have been collecting the delicate flowers to take down their holes.

Takwela has had great viewing from the comfort of the lounge chairs with several antelope species, warthog, elephant, hyena and lion strolling across the open ‘wafwa’ opposite the camp, not to mention scores of basking hippo and crocodile.

New student applications have been coming in thick and fast for 2020 and we’re facing the rather daunting task of selecting some candidates to add to the 2020 skills training programme. It’s always a tough process as we’re unable to accept the majority of entries. If you would like to fund a student, please get in touch.

An exciting new project is now underway at Mkasanga School – the building of a new classroom. Thanks to the incredible generosity of one of our guests this year, who is funding the building, we have got a builder in to start the foundations before the imminent rain stops all progress till next year April.

Game drives for the kids conservation Chongololo club went out at the end of the month with thirty children and 12 teachers enjoying some good game viewing. They put the guides to the test with lots of ‘good questions’, as Mukupa (Cooper) put it.

The Shipikisha ladies club in Mkasanga have started a new project with the help of another generous guest who is funding a sewing business for the ladies. We ordered their first batch of materials in for sewing uniforms and chitenges so they can get to work on their first business model during the emerald season.

Last but certainly not least Zambia celebrated Independence Day on the 24th of October with a patriotic cake and singing of the national anthem. Happy independence Zambia!