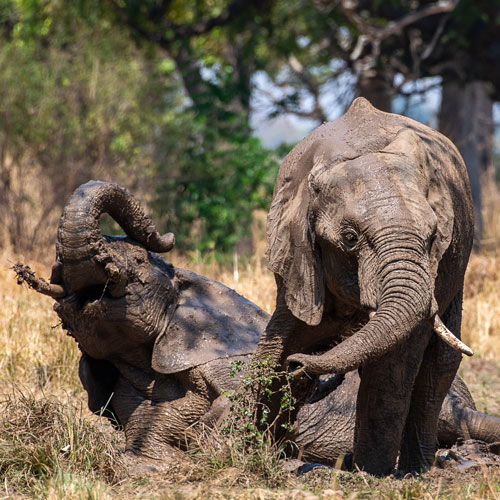 August in the Luangwa

After a lovely long winter August has heralded the warmer weather with the sun rapidly absorbing most of the water in outlying lagoons and the August winds breezing in a nice general warmth. Many of the trees and bushes are flowering, most noticeably the Sausage Trees which are also simultaneously sprouting fresh new leaves. More game is concentrating around the river and our camp waterholes, making hide (and camp) viewing very exciting and we’ve also had some great cultural visits this month.

The Sausage Tree is arguably one of the most important trees in the Luangwa, supporting a vast array of animals including our abundant hippo population. The Luangwa Valley is the only confirmed area where hippos are known to consume sausage fruit and this is a key factor in sustaining them through the tough drier months when their normal food is scarce. The first glimmer of the day’s light is now accompanied by an excited buzz of bees as they race around the flowers before they drop to the ground where they are hoovered up by hungry mouths below.

Birds and the bees

We’ve had several sightings of mating lions this month with one couple conveniently performing next to Tafika Camp for a couple of days. After their little honeymoon at Tafika they crossed over the Luangwa river with a sneaky crocodile pestering them all the way. Just before reaching the safety of the bank the male whipped around to confront it after a nip on the tail.

Lions on the rise

So with all these panthera leo love birds around we hope that our lion numbers are on the rise. Ironically, we had great sightings of lions literally on the rise with the Nsefu pride positioned beautifully up on a bank at eye level this month.

The buffalo herds are amalgamating and recently we’ve been seeing up to a thousand animals together. Such huge numbers grouped in a dusty cloud make for an impressive spectacle, especially when they crowd around the water to drink.

Time with elephants is always a highlight. We’re having daily interactions with family and several bachelor herds with majestic bulls.

These interactions are not restricted to the game viewing activities and elephants are regularly wandering through the camps. Sometimes the best game viewing is from your chalet!

Although we’ve been seeing a huge number of hyenas this year, the leopards are managing to stay one step ahead (most of time) and there have been a number of kills successfully stashed in trees by our spotted beauties.

The Carmine bee-eaters are congregating and some colonies have already started busily burrowing nests in the banks of the Luangwa. Even Pink nose finds them mesmerising!

The Crowned crane numbers are also on the rise and we’re enjoying lovely sightings as they routinely fly into the delta area in the mornings.

We’ve had several sightings of the wild dogs and the month ended with a bang with our first sighting of the puppies for 2019. The Mwasauke pack has two new pups which we hope to see a lot more of over the next few months.

This month we welcomed Netzy who stayed in Mwaleshi and Takwela, our newest camp, up in the North Luangwa where she added on a visit to the local village, Mapamba. Netzy did an educational presentation with the girls and brought a bag of menstrual kit supplies, following the Days for Girls programme. She also visited us at Tafika, where she added on a visit to Mkasanga village to follow up with the girls there. Mkasanga village had a Days for Girls educational in the past but it was great for them to have a follow up and really appreciated a bag of goodies sent by Jane, past guest and Days for Life educator.

The whole crew back in action

Brent and Bryan were the last to arrive this year but are back in the Luangwa with Brent heading up Mwaleshi in the North Luangwa and Bryan at Tafika taking out drives and photographic safaris. Bryan has just completed a 6 month photographic course in Cape Town so we’re expecting great new results from his lens.

Most of us try and avoid the dirt, especially mud, but if you’re an elephant, this is certainly not the case. These mud baths play quite an important role in controlling the body temperatures and in protecting elephants from parasites – in particular those pesky tsetse flies, but who says you can’t have fun while doing it!

The Tafika Camp hides are perfectly placed to watch this muddy happiness and with things heating up, the elephants are visiting on just about a daily basis.

“Birds for the brains and elephants for the soul”

With our abundant and varied bird life and resident elephant herds, we’re feeling pretty brainy and soulful all round so there’s lots to celebrate. Any excuse for a lovely sundowner on the Luangwa river – and we’ve had a few great ones this August. Cheers! Till next month…